Longrow Peated single malt Whisky confidently emulates bold smoke with sweet notes
Details
It is no secret that Scotland's climatic conditions and the incorruptible, geographical location contribute to the highest quality of single malt Whiskies in the world. The proximity to the coast, the rainy weather and the fresh winds offer the perfect conditions to grow refined grains.

A rather unknown candidate in Scotland is name Longrow Peated single malt Whisky from the five generation strong Springbank distillery. This awesome Whisky is distilled and bottled on a peninsula in the South West of Scotland and thus in the vicinity of the island of Islay. In addition to typical coastal Whiskies, this Longrow scores with its sweet and smoky tunes which tastes fantastic. The Mitchell family have “officially” owned the distillery since 1828 however the family had been running an illicit still for five generations prior. The Mitchell family control the entire process of the production in a traditional way – malting, kilning and milling. None of their products are chill-filtered or have any artificial coloring. The only addition to the spirit is water.

The aroma of this well-balanced Longrow Peated single malt Whisky engages the consumer and gives an impression of scrumptious sweets such as marshmallows coated with vanilla sauce. Some coastal smoke comes to the foreground which mitigate the sweet notes. On the whole a full bodied creamy flavor which will make the mouth start to water in anticipation of tasting.

The taste of this remarkable Longrow single malt promises a perfect balance of sweetness and smoke. A touch of fruit like apple, rhubarb, green grape and a touch of citrus can be noted. First the mouth is met by vanilla tones followed by vigorous peat smoke. Also, a drug-like note resonates. Connoisseurs and lovers define it as a kind of cough syrup which ideally fits into the smoky-sweet composition. Overall, a taste which promises recognition!
The finish of this great tasting Peated single malt Whisky from Scotland scores again with peat smoke, which gives the taster an attractive resonance.

Through the production of this well-rounded Longrow Peated single malt, the malt used is kilned for two full days over a slow burning peat fire. In addition the spirit is subject to a double distillation and then oak maturation. By now it is clear where this beautiful smoke comes from.

In conclusion the Longrow Peated single malt Whisky is the epitome of a smoky coast monster. It should be noted however that the vanilla beans provide the special PEP and the attractive harmonious sweetness. 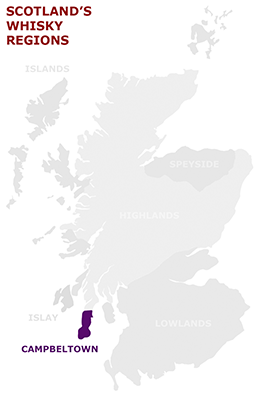