The triple distilled Auchentoshan Heartwood is a Lowland whisky, which received its rich flavours from maturing in three different kinds of casks
Details

The Auchentoshan Heartwood is a single malt from Old Kilpatrick, which lies in the Lowlands of Scotland. Its bouquet is rich of dark fruits like prunes or raisins and has honey notes as well as hints of dark coffee.

The smell of sherry is also quite clear. The palate is touched by a little less sweetness than the nose. Nevertheless, a sweet fruitiness is to be found, which softens little by little. It reveals coffee, some gentle bitterness of the European oak and nutty aromas of almonds and hazelnuts. To the end it gets more dry.

The Auchentoshan Heartwood is a triple distilled Lowland whisky, which matured in three different types of casks. The first two phases of the maturing process are spent in ex-bourbon casks.

First it is filled in so-called hogsheads and then in standard bourbon barrels. Both of them contained bourbon before, so the only difference is their volume.

Hogsheads are just bigger reconstructed standard barrels. In the third step the whisky matured in ex-Oloroso sherry casks. They provide for the sweet sherry flavours and drive the colour a bit darker, more amber-like.

Special about the Auchentoshan Distillery is, that it is the only whisky manufacturer in the Lowlands, which is still distilling three times.

It is possible to reach a higher level of alcohol by volume by applying the triple distillation. That causes the dissolution of fusel oils, which carry flavours. Without those fusel oils, the flavours of the spirit are reduced and it becomes milder and softer.

That does not mean the whisky has no aromas. As mentioned above, the rich flavour and its inimitable character is formed during many years of maturing in well-selected ex-bourbon and ex-sherry casks.

After being offered only for travel value, the Auchentoshan Heartwood single malt Scotch finally found its way to the regular market. 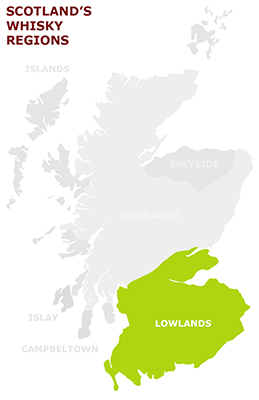